One possible answer: its owners' fear. As a dog grows up and loses its reassuring puppy appearance, the owners can become afraid of its attempts to impose itself on its own kind. Interrupting these interactions, telling the dog off or preventing them can however have negative consequences.

At two years old, a female American Staffordshire Terrier began to attack other dogs, apparently without warning. When asked the question "Did the owners reprimand and punish it when it attempted to establish itself around other dogs?" The response was affirmative: "Yes, they were worried that it would hurt or frighten the other dogs."
When two dogs meet, they try to establish who is the stronger, not just physically but especially in terms of character. A dog with its head and tail held high is a sign of dominance. 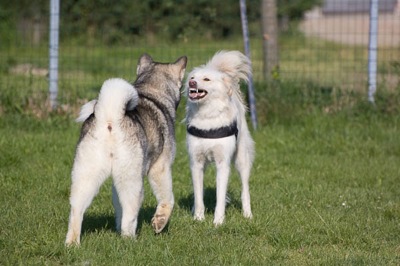 The risk here is of reducing the dog's capacity to communicate with the other dog, increasing levels of stress and frustration when interacting with other dogs, and preventing the dog from developing its personality and proper social skills.
If you have a strong dog, you should be careful not to turn him into a bully, yet you should also allow him to express his personality. The frustration (not being able to interact with other dogs), stress (being told off, punished), insecurity (not knowing how to interact with other dogs), can lead the dog to avoid contact, or rather skip communication entirely and react with aggressive behaviour inappropriate for the situation.

More on "Ethogram of imposing behaviors of the dog"